We humans like to think in tidy, distinct categories. Things are different, or they are the same. If they are different, we put them in different piles. If the same, we lump them into the same pile. Life is easy.

Categorization is, of course, absolutely necessary to get through the day: If we didn’t distinguish between “dangerous” and “safe,” we might try to eat our cereal bowl instead of our cereal. But easy categorization also has its downsides. We often think that the  mental categories we’ve created reflect the fundamental nature of reality. This can make us biased, prejudiced, blind to obvious facts, narrow in our thinking, and emotionally stupid. And it can happen without our ever being aware of the fact.

Economy/society. Compassion/resentment. Birth/ death. Men/women. Me/you. Leader/follower. Does thinking of each side of these pairs as separate and different get us in trouble?  In some cases, it’s been Zen study that has led me to question an easy dualism. (A good Zen motto: “Don’t believe everything you think.”) Other times the questioning has occurred as I’ve studied economics, language, dance, or even statistics. I’ll be reporting my experiences with a number of these cases on this blog.

But let me get a little more abstract for a moment, and dig into the structure of these mental categories, themselves. We often fall into the trap of thinking that if things are not the same, they are opposites. We even think of “different” as the opposite of “same”:

Instead of thinking of difference and sameness in terms of a polarity, try this: 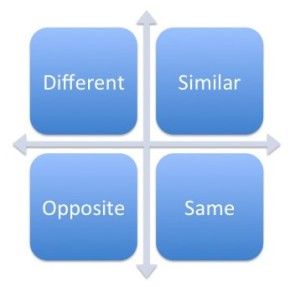 The opposite of sameness is not just difference, but absolute difference–having nothing at all in common. I’ve labeled this “opposite” in the figure, but depending on context we might prefer words like “disjoint” or “antithetical.” We might also say “identical” instead of “same.”

And another new word appears in the diagram: similar. Things can be different from each other and similar to each other at the same time, overlapping in their characteristics. Vanilla and chocolate cupcakes are different, but both are pastries. Even cupcakes and gorillas are more similar to each other than, say, cupcakes and loyalty, since both cupcakes and gorillas are tangible. The stones in the photo above have been separated into black versus white, but they are all stones. And the stones in each pile, while similar, are not identical. They differ in size.

Well, that seems obvious! But I’ve been surprised, over and over again, by how hard it can be to look past out habituated, often polarized, categories. We are easily drawn into  thinking that things are different, or they are the same. If they are different, we put them in different piles. If the same, we lump them into the same pile.

If you doubt that you ever think so simplistically, you might want to look first at the post “Surgeon and ?”  You may learn something interesting about how your mind works…

Julie A. Nelson is a Professor of Economics, Emeritus; a writer on gender, ethics, economics, and ecology; a senior assistant teacher at the Greater Boston Zen Center; mother of two grown children; and, when energy permits, an avid dancer. View all posts by Julie A. Nelson

2 thoughts on “Mixing It Up: Introduction”