Part 3 of a reflection on birth, death, and the Linji Lu 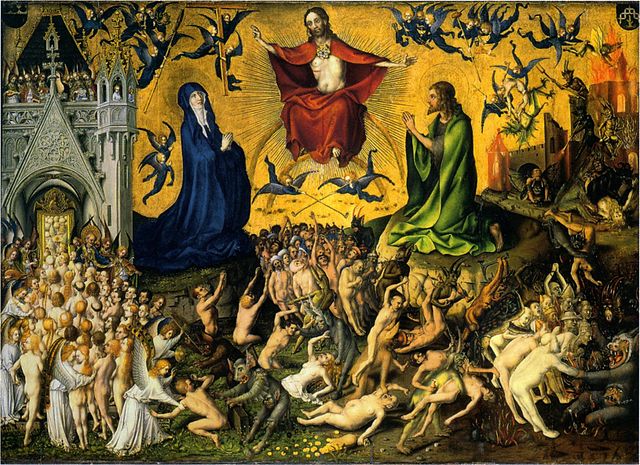 Where does that feeling that something more–that too much–is expected from me come from?  Many of the dharma talks that I listened to online, being too ill to attend the January sesshin in person, looked into our fundamental and common sense of “lack.” They examined how this drives us to think we need to be someone else other than who we are. Certainly my feelings of fear about under-performing during my sabbatical semester was an instance of that.

Also, more particularly, I could see how these fears were reinforced by being brought up in a Protestant Christian faith tradition that includes teachings about a final judgment day. After we die, I heard, we’ll be evaluated to see if we have measured up. Who is it that, in my moments of dreading the responsibilities that come with birth, expects me to do more than I can do? Some ultimate evaluator of my life who I will face at the end?

I have felt in my Zen practice some relief from this feeling of pressure, of being judged, so it was with some distress that I first read this part of the reading from Master Linji that was selected for study at the retreat:

“Venerable monks, you should live your lives in a very natural way. Do not put on airs. There are a number of shaved heads who are not able to distinguish good from bad. They say they see spirits and demons. They point to the East and the West, and they pray for rain and sunshine. This group will surely have to repay what they have borrowed and one day before the judge of the dead, Yama, they will swallow lumps of molten iron. And those of good families who are deluded by this group of wild fox spirits will also have to pay the debt of the rice they have eaten. There is no way they can avoid it.”

–from the Linji Lu (The Record of Master Linji) Part 11, translated by Thich Nhat Hanh in Nothing to Do, Nowhere to Go.

Zen practitioners have to meet “the judge of the dead, Yama” and may be forced to “swallow lumps of molten iron.” Damn. (Pun intended.) Does Zen, too, teach that there will be condemnation, and punishment with fire and brimstone, if you don’t achieve some high standard of goodness?

But let’s look more closely at the passage.

I fear being judged for not having achieved enough, not being exceptional enough. Linji says it is those who claim to be exceptional, who “put on airs,” who are judged.

I fear being not spiritually accomplished enough. Linji says that it is those who claim accomplishment, who “claim to see spirits and demons,” who are judged.

I fear that I won’t give people good guidance when called on, and Linji says it is those who claim to be clear about directions, who “point to the East and to the West,” who will be judged.

I fear I will be judged for, quite literally, not being able to influence the weather: The book I was intending to write during my sabbatical was, in part, about climate change. Linji says it is those who pretend to control the weather, who “pray for rain and sunshine,” who will be judged.

Linji turns my fears on their head.

And the failings Linji describes are characterized as creating “debts.” The teachers who put on airs will need to “repay what they have borrowed” and their followers will have to “pay the debt of rice they have eaten.” What is this “debt?” If our response to receiving our precious human birth and our daily food is to is to use these to live our own lives, messy and awkward and ordinary as they may be, no debt is incurred. But if we receive these and use them to seek to be somebody else, to live some more perfect kind of life, that “somebody else” has in some sense borrowed our rice, and needs to give it back.

And is “swallow[ing] lumps of molten iron” about being punished? Nearly the same phrase is used in another very famous Zen passage. Students often begin their study of Zen koans with the Mu koan. In  Wumen’s commentary on the Mu koan, delving into the study of Mu is said to be “like swallowing a red-hot iron ball.” Perhaps Yama is not punishing us when we stray, but instead invites us again and again to face into the great matter, the great mystery. Perhaps Yama is inviting us to delve into intimacy with the universe, and to question our belief in a self that is separate from others.

While judgment day scenes are part of longstanding Christian tradition, my own Lutheran minister father’s view tended more towards heaven or hell being things we ourselves create. He used to tell the story about a group of people who wake up to find themselves  seated at a long banquet table covered with dishes of all kinds of delectable food. They are very hungry, but they find they have no elbows and so can’t get their forks to their mouths. Treating themselves as separate from others, they are condemned to longing and frustration. This is hell. Another group of people wakes up in the same situation, but they each use their stiff arms to feed the person across from them. Understanding that they are not separate, and taking care of each other, they find satisfaction and fellowship. This, my father used to say, is heaven.

(Part 3 of 4. Back to Part 2: When the responsibilities seem like too much…. Forward to Part 4: Loss)

Julie A. Nelson is a writer on gender, ethics, economics, ecology, and Zen; a Professor of Economics, Emeritus; a Dharma Holder and Teaching Coordinator at the Greater Boston Zen Center; and mother of two grown children. View all posts by Julie A. Nelson